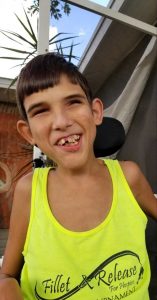 Meet 19-year-old James. He was born prematurely, and doctors were concerned when his brain hemorrhaged. They were even more worried about his underdeveloped lungs. As a result, James spent eight months in the hospital and four months on a ventilator after birth. James’ mother, Debbie, also noticed that he was having nightly seizures. He was eventually diagnosed with partial epilepsy. His seizures were very frequent until he took medications at the age of 14 to better control them. Furthermore, James has cerebral palsy, causing significant trials. He is cognitively equivalent to a five-year-old child. He is nonverbal and blind. He also cannot walk without assistance.  James is not the only family member with challenges. Their family experienced many tragedies, including the loss of James’ brother from a car accident and his father is going through the beginning stages of Alzheimer’s disease.

This is a mountain of obstacles for the family, but they push through with uncommon courage.

James and his mother fight hard for happiness. They take strolls in parks. The refreshing outdoor air and warm sun brings them peace. On hot days, they visit a local water park to be invigorated. Quiet days at home include Debbie reading poetry to her son. Debbie is dedicated to keeping her family safe and home, because that’s where their heart is found. And, the center of that heart is James. He is the pride and joy who binds the family together during the hard times.

James needs a bathroom modification. He loves taking baths, but the tub is old and leaking. Debbie is requesting a new bathtub for James. Please be his sponsor.