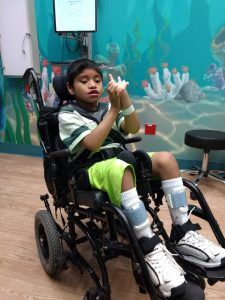 Meet 10-year-old Jessy. He was diagnosed with Agenesis of the Corpus Callosum, an illness characterized by the absence of white matter which connects the two brain hemispheres. He also suffered from brain swelling. His life is difficult resulting from these conditions. He is cognitively impaired and nonverbal. Jessy also cannot walk or stand, but he scoots on the floor for mobility. He overcomes these obstacles with a determination to be happy.

Jessy has his own way to have fun. He watches anything on television, but his favorite shows are cartoons. Jessy sways his body to soothing music by Ha-Ash. He also loves when his mom tells stories by singing. Her soft voice makes him smile and relaxed. Jessy’s mom has a proud tone in her voice when describing her son as handsome. Beauty comes in many forms, and none are more radiant than Jessy’s heart.

Jessy needs a wheelchair lift for the family car. The equipment will make transportation easier and safer when he maintains doctors’ appointments. Please be his sponsor!