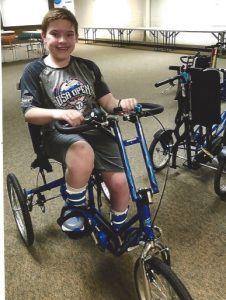 Meet 11-year-old Joel. He was diagnosed with multiple illnesses, including spina bifida and hydrocephalus.  He can only walk with assistive devices like a gait trainer. He spends most of the time in his wheelchair. Joel refuses to let these limitations control his life.

Joe is best described as determined and full of energy. He and his mom are always pulling funny pranks on unsuspecting family members. Joel is also an Elvis Presley fan. He can even play the iconic music on his guitar with astounding perfection. Joel enjoys physical activities, too. His favorite is Karate. Joel’s inspiration for the martial arts comes from his favorite movie series, The Karate Kid. Joel competes in para-Karate tournaments and hopes to one day try out for the Paralympic Team—he certainly has enough determination to “be the best around!!” Joel never lets life knock him down. He fights his illness like a champion.

Joel needs an adaptive tricycle to promote better leg strength, stamina and overall health.  He recently tried on out at therapy (in the picture), and his mom knows it will work wonders for his strength and coordination-building.  Please be his sponsor!