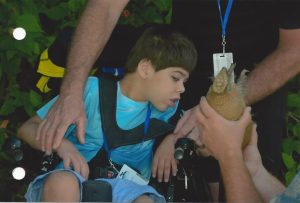 Meet seven-year-old John. He began having severe seizures four hours after his birth. A year later John was diagnosed with cerebral palsy and a form of epilepsy known as Lennex Gastaut syndrome. He has numerous challenges and struggles resulting from the illnesses. He still endures seizures. He is also nonverbal. Furthermore, John suffers from left-sided weakness and he cannot walk without assistive devices. He remains joyful even with his limitations.

John enjoys a variety of fun activities. He is mesmerized by  the flickering flames of his electronic fireplace. He also likes visiting Busch Gardens and Disney World. His favorite rides are the train and merry go round. His favorite activity, however, is swimming. John feels at his best floating weightlessly in refreshing water. John is also described as a cuddle bug. He can be very affectionate and loves hugs and cuddles. The only problem is energetic John rarely slows down. He must be caught first! John is a sweet boy who makes life exciting and inspiring  for his family.

John needs an adaptive tricycle to improve his leg strength and stamina. He can also have a great time on the trike. Please be his sponsor!