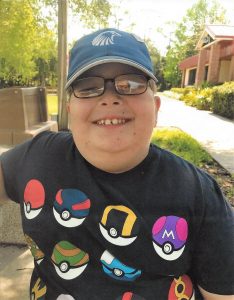 Meet 8-year-old Nate. He was diagnosed with a rare illness called Pro-opiomelanocortin or POMC

The infirmity causes many adverse effects, including uncontrollable weight gain and adrenal deficiencies. Nate also has sleep apnea.  The illness can have life-threatening consequences, especially if he contracts a virus. As a result, he cannot socialize with too many friends. Nate has discovered, however, a modern way to meet people.

Nate’s Mom says that he has a story to tell the world. The tale begins with Nate’s strength. He is described as having a bubbly personality–nothing gets this courageous boy depressed. His positive attitude makes him a people magnet. He has been adopted by a golf club in Daytona Beach. Nate plays with the members. They feel enriched whenever he appears with a smile like he just won the Masters tournament. Nate also has a busy social life on the internet. He has a Facebook page overflowing with adoring fans. A Facebook camera crew even made a film about the inspiring boy. Nate has a story to tell, and everybody wants to turn the page. And see what’s next.

Nate is requesting a specialized bicycle which will help him to exercise. Please be a sponsor!