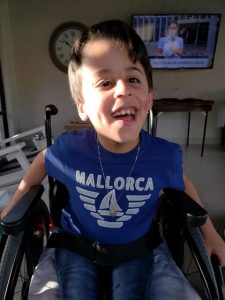 Meet nine-year-old Michael. His life was difficult from the very beginning. He was born only after 23 weeks and diagnosed with cerebral palsy. Instead of going home to the comfort of his family, Michael had to spend seven months in the hospital. He has endured 14 surgeries and needs even more procedures. His last surgery took almost seven hours. Michael has daily challenges as a result of his illness. He is cognitively impaired and learning how to walk using a gait trainer. These obstacles might seem insurmountable for Michael, but he is remarkably resilient.

Michael can be described as a great kid with cool interests. He listens to a variety of music, but his favorite artists are Andrea Bocelli and Mark Anthony. He likes reading, writing, and putting together puzzles. He enjoys going outside and playing ball with his dad. Michael also participates in equine therapy. Most of all, Michael is simply awesome, and his biggest fans are mom and dad. His father says, “Everyone said our life would be hard and it has been all the contrary! Every day he gives us a new surprise, sometimes it’s doing something he has never done before. His drive is just amazing. He’s at therapy at 8:00 am and at 3:00 he wants to keep going!” Michael’s mom says that her son is beautiful and that he wakes up each morning with a big smile. Both parents say in joyful unison about their son. “He is our biggest blessing.”

Michael needs a therapy tricycle to improve his leg strength, endurance, and coordination. The trike will also give him an opportunity to play outside with his friends. Please be his sponsor!