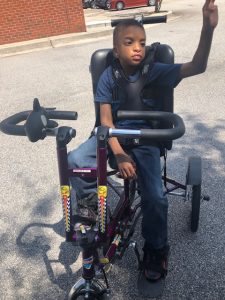 Meet seven-year-old Yahushua. He was diagnosed with a difficult illness known as   hydrocephalus, which causes fluid and pressure on the brain. His challenges are numerous as a result of the condition. He is cognitively delayed and nonverbal. He endures frightening seizures. Yahushua also cannot walk, but he crawls on the floor or moves around on his knees. Yahushua is a joyful child despite his tribulations.

Yahushua is simply adorable. He laughs until his face is red whenever watching Wreck It Ralph. He rocks back and forth to all types of music—clap and say his name during a song and Yahushua squeals with delight. His favorite activity is tossing everything out of his toy box and then sitting inside like a little king of his domain. Yahushua’s cuteness does not end here. Yahushua participates in conversations by making babbling sounds—this child has a lot to say and he will be heard! Look into his eyes and he will make a mischievous smirk as if to say, “I’m the cutest boy ever and I can get away with anything!” And it’s true, because Yahushua has stolen our hearts.

Yahushua needs a therapy tricycle to improve the muscle tone and strength in his legs. He will also have a great time riding and causing trouble on his new trike. Please be his sponsor!