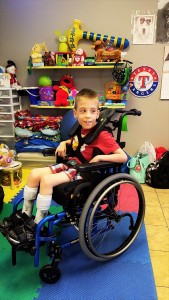 Brock gets a new wheelchair!

Meet the mighty Brock! This 8 year-old boy endures Cerebral Palsy and many other illnesses. He has several obstacles, including the inability to support himself upright. He is also cognitively underdeveloped, which causes limited speech capability. Brock pushes his way through these challenges as befits a champion!

The most inspiring athletes are those who overcome the greatest trials. Brock, despite his disability, enjoys physical activity. He loves to go swimming. The buoyancy lifts the pain from his limbs and he feels like a new boy. More importantly, Brock is a true competitor. He participated in the Special Olympics and won a gold medal for bowling. Cheers and tears erupted when he received the award!! The shimmering gold appeared dim compared to Brock’s heart melting smile.

Wheelchairs 4 Kids was able to give Brock a new manual wheelchair. He outgrew his old one and insurance wiould not pay for another wheelchair.  Now Brock is in the right chair to suit his needs!