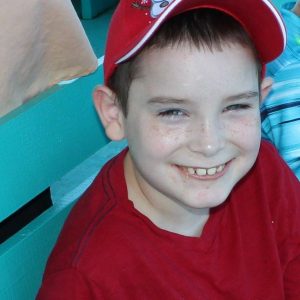 Meet 10-year-old Colin. He has born as what everyone thought was perfectly healthy. At age 7, Colin started showing signs that something wasn’t right; walking was becoming increasingly difficult, as were other activities of daily life. He was then diagnosed with neuroaxonal dystrophy, a rare lipid storage disorder that affects the nervous system. His health has declined. Colin is frustrated that now he cannot talk, walk, or do other simple tasks. Colin, however, has an iron will that doesn’t bend under burden.

Colin works hard to have a carefree life. He is a fan of superhero films; play a Marvel movie and he is glued to the television. A large part of his day is also listening to his mom read books. Colin is a determined student, too. He recently graduated from sixth grade. His family and friends were very proud of the achievement. Friends and family are important to Colin. He has a special pal at home, his kitty named Riley. Colin adopted Riley a year ago. The loyal kitty waits by the door for Colin to come home from school. Colin sometimes becomes sick, and the sweet Riley never leaves his side. Colin is a thoughtful boy even when he is ill. He is always concerned about his sister, who suffers from the same illness. In short, Colin tries to be carefree, and yet succeeds at being a caring disabled boy. Meet Colin and find kindness.

Colin needs a special positioning table to assist with transfers and physical therapy. Please be his sponsor!

Colin received his positioning table. Mom says: ” Colin has become so much easier to move and position.He is so much more comfortable having a special place just for him.”