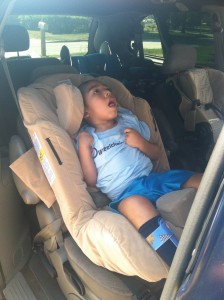 Enrique is four years old and suffers through a list of disabilities resulting from severe brain damage and epilepsy. Enrique’s movement is extremely limited and he has difficulty controlling his head. Enrique has a manual wheelchair for mobility. The struggling child also has poor vision. Furthermore, he must use a g-tube to receive nourishment. Enrique is determined to find enjoyment in life despite his challenges.

Enrique needed an adaptive car seat. His old car seat was too small and did not provide the proper trunk and head support. Now, Enrique has a new car seat that gives him great support and also has plenty of growth room! Enrique’s new supportive car seat allows  him to get to doctors’ appointments and out into the community safely!

Enrique is a big fan of Pocoyo, an adorable cartoon character that learns many new things during playful adventures.  Despite Enrique’s difficulty eating, he loves a sweet and smooth yogurt treat. This is a healthy snack that really makes the adorable boy smile! Enrique has a wonderful family who supports him, especially his loving mom.