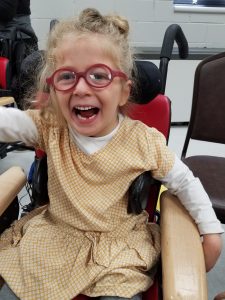 Meet seven-year-old Esther. She had a traumatic brain injury that damaged her motor skills and speech ability. Esther is unable to walk, although she can put weight on her legs and stand with support. She is also nonverbal and visually impaired. Esther is a contented girl despite the harsh changes in her life.

Esther has simple interests that are important for her happiness. She likes having lunch at her favorite local pizzeria, but most of all her preferred delicacy is creamy cheesecake.   Esther enjoys going to the park and playing on swings. She finds the rhythmic motion soothing.  She is relaxed when playing with therapy dogs and bunnies at her school. In fact, Esther just likes going to school. She is very social and her favorite thing is being around people. The feeling is mutual. People drift towards the happy Esther as if she reeled them in for a hug.

Esther needs a therapy tricycle to improve he leg strength, stamina, and endurance. The trike will also be a great way for her to have fun. Please be her sponsor! 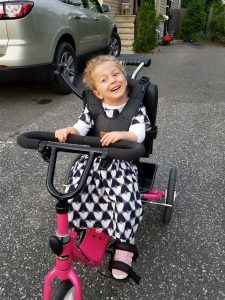 Esther received her very own therapy trike. She loves being able to ride every afternoon with her siblings and friends. She gets so much additional work on her muscles that she’s not even aware of, this will help her gain strength and balance while she’s enjoying being a kid!