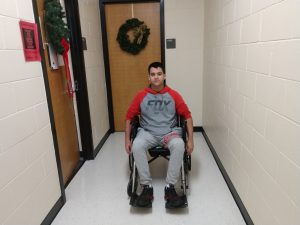 Meet 15-year-old Joan. He was developing as a healthy boy until he began losing balance and falling. After many tests, Joan was diagnosed with an autoimmune neuromuscular illness known as Myasthenia gravis. The condition is characterized by muscle weakness that affects most areas of the body, including eating, breathing, and walking. For example, Joan has low muscle tone, and he is confined to a wheelchair. This young man fights through his challenges in the best possible manner.

Joan has several interests. He enjoys the Mind Craft video game. He also listens to music and hopes to be a rocking guitar player. He attends school and is a math wizard. Joan’s best trait, however, is his perfect personality. He is very loving towards his family. Joan also appreciates everything in his life and never asks for anything. In fact, he is generous and helping others is his passion. Joan would probably like to be an ordinary teenager. He is something more. Joan’s heart makes him extraordinary.

Joan needs a wheelchair ramp for his home. The equipment will give him greater independence and safety.

Joan’s ramp was built in less than 2 weeks. The first time he was able to leave his home independently, tears rolled down his mom’s eyes. She was just so amazed at the life changes that would be happening in the young boys life.