Marli Gets a Special Stroller 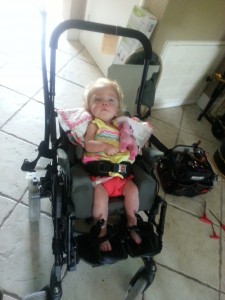 September 2014-Marli lost the skills she had previously acquired and had developmentally regressed since her diagnosis of GM1 gangliosidosis in April of 2014. Marli is immobile because her organs are enlarged, which is part of her disease process and she is also very uncomfortable.  She was using a non-adaptive stroller but needed something much more specialized to support her head and maintain her airway for easier breathing.  Marli’s head is very large in proportion to her body and her neck is very weak so a therapeutic stroller with a special angle and extra support was needed.  Thanks to the help of Custom Mobility, Wheelchairs 4 Kids was able to provide Marli with a comfortable and safe stroller! Marli even went out for a walk with her mom and was able to enjoy the fresh air and sunshine.

Marli is a 10 month old little girl who suffers from a rare disorder called GM1 gangliosidosis.  GM1 gangliosidosis is an inherited disorder that progressively destroys nerve cells in the brain and spinal cord. The signs and symptoms of the most severe form of GM1 gangliosidosis, called type I or the infantile form, usually become apparent by the age of 6 months. Infants with this form of the disorder typically appear normal until their development slows and muscles used for movement weaken. Individuals with GM1 gangliosidosis type I have a very poor prognosis. 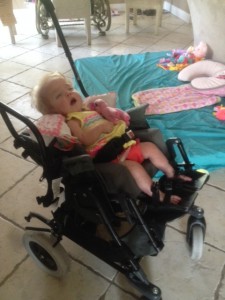