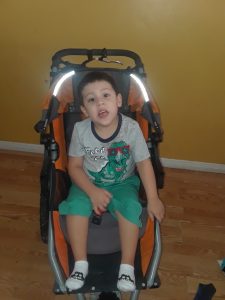 Meet four-year-old Aldahir. His mom, Amber, noticed that he was not progressing normally, especially when compared to his cousin of the same age. Aldahir was eventually diagnosed with hypotonia and developmental delay. He is cognitively equivalent to a two-year-old child. He can stand, but his balance and strength are poor and attempts at walking are unsafe.   Aldahir also has limited speech ability.

Aldahir is a fun boy with one important aspiration. His favorite tv show is Sesame Street. He loves Disney films like Moana. He also listens to hip hop music by Post Malone. Aldahir even tries to be active. He attends school and the best part of his day is using a walker—he loves the feeling of being independent and mobile! The most thrilling day of his life was visiting Busch Gardens. He bounced and wiggled with joy while being on the children’s rides. Most of all, he likes being outside with his siblings, and especially his cousin. The two kids are best friends and are nearly inseparable.  Aldahir has one goal. He wants to be healthy and able to play with his friends and family. 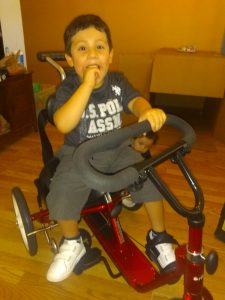 Aldahir has recieved his new Rifton Trike in his favorite color! He is so eager to finally be able to ride outside with his cousins! Mom is happy that he’ll be able to start strengthing his legs to be able to soon walk. We at W4K are beyond happy to see Aladahir’s excited face for his new trike.