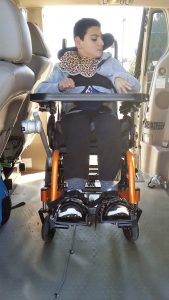 Hip hip hooray, the installation is complete! Edgar has received an EZ Lock Docking System and now transporting him will be much easier for him and his family. The 12-year-old was diagnosed with cerebral palsy and developmental delay. Edgar is unable to walk and uses a wheelchair to be more independent.  He also is incapable of verbal communication. Instead, Edgar uses his expressive eyes and modern technology to show his feelings. The young boy has other limitations, but his strength is boundless.

Edgar has several interests. He likes music, which is his favorite subject in middle school. His best friend at junior high is Eli. They are inseparable buddies. Edgar is also eager to spend time with his mom. She is Edgar’s primary care giver, and they relax by taking walks and laughing all the way. Edgar is always giggling and his jovial nature is very infectious. He spreads cheer to his friends and family. Edgar does this even while struggling with his own challenges. His strength is even more contagious.

The EZ Lock Docking System will hold his wheelchair in place while traveling in the family vehicle. Thanks to EZ Lock for donating the docking system!  Edgar is both safe and happy now!