Gage gets his new prone stander! 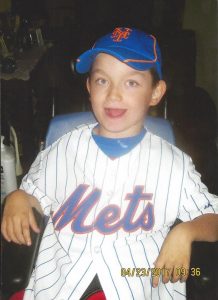 Seven-year-old Gage is thrilled! Wheelchairs 4 kids got him a new prone stander just in time for summer!  Gage is diagnosed with cerebellar hypoplasia, a neurological condition in which the cerebellum is smaller than usual or not completely developed. He is unable to walk and uses a manual wheelchair for mobility. While he is verbal, he is shy and just recently started speaking full sentences. Despite the challenges he faces, he remains a playful, happy little boy who loves spending time with his family.

Gage enjoys many things. He loves listening to music on the radio, and despite his disability, he can keep a beat! He also loves baseball and is a big New York Mets fan! He and his grandfather cheer them on whenever they can! One of the highlights for him took place a few years ago when he met his favorite player, Lucas Duda at spring training!

Gage is progressing in his ability to walk and the prone stander will allow him to be eye level with his peers. Go Gage! We are so happy for you!