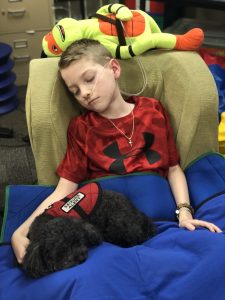 Meet 10-year-old Gavin. He was diagnosed with mitochondrial myopathy, a rare illness that affects many systems. He has severe muscle weakness and his ability to walk is impaired. Gavin spends most of his time in a wheelchair. He endures frightening seizures. He is also struggling with early onset dementia—he was an advanced reader at three years old, but words and letters no longer have meaning. Gavin remains cheerful despite his unrelenting challenges.

Gavin is determined to have a fun childhood. He likes movies. His favorites are Star Wars and Elf. He watched Elf so many times that mom must hide the worn-out DVD. Gavin is also a hockey fan; he supports the minor league team, Florida Everblades. Gavin once lost a tooth and he was excited to resemble the team’s star player, Mitchell Heard (who knocked out a tooth during a game).  Gavin said, “Now I look like Mitchell!”” The intensity of seeing a hockey game contrasts to Gavin’s other favorite pastime. He loves to fish. Spending a relaxing day holding a fishing pole soothes Gavin. He is more than a boy who has fun. He has a huge heart for his family. He is constantly concerned that his challenges stress his family. Gavin has every reason to think about his own problems. Instead, he is a selfless hero who wants to make other people happy. 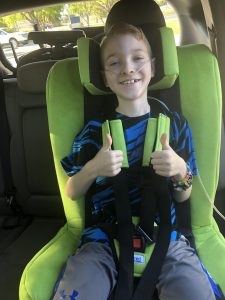 Gavin has received his new car seat in his favorite color!  Mom is so happy and says it is perfect for Gavin! We at W4K are so happy to see Gavin’s double thumbs up and beautiful smile!