Glenn gets an Easystand Evolv Stander! 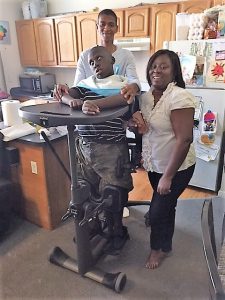 Hip Hip hooray!  Glenn is so happy!  He has received his EasyStand Evolv stander. The 14-year-old was diagnosed with a form of cerebral palsy known as Congenital Spastic Quadriparesis. The illness has resulted in several limitations. Glenn is unable to walk, although he can stand with assistance. He also has difficulty communicating. Glenn remains a happy boy despite his trials.

Glenn likes to relax. He enjoys listening to soothing piano music. He also watches television; his favorite show is Bubble Guppies. Glenn sometimes has fun playing with his siblings. Glenn has a loving family, especially his mother. She is his primary care giver. She frequently lifts her son throughout the day, and with each transfer she wears a graceful smile meant only for her disabled son. They have a common bond. She carries Glenn. He holds her heart.

Glenn’s new Easystand Evolv will help increase his leg strength and stamina. It will be a great form of exercise for him and now he has one at home! Go Glenn!