Kayla in her new adaptive tricycle! 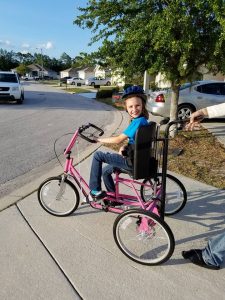 Nine-year-old Kayla is all smiles! She received her new adaptive tricycle and loves it! This little girl was diagnosed with a form of cerebral palsy known as Spastic Hemiplegia. She is cognitively delayed due to the severe illness.  Kayla was a cheerleader until surgery in 2013, which removed a brain tumor. Now, her ability to walk and run is impaired. She also lost the use of her right arm. She is, however a very cool kid.

Kayla is interested in many popular diversions. She listens to music and her favorite artists are Bruno Mars and Justin Bieber. She also likes watching SpongeBob SquarePants and the Disney film Frozen. Her best afternoon would be seeing these movies, while eating McDonald’s chicken nuggets. The most important thing to Kayla is interacting with her family and friends while playing a board game. Kayla, in fact, is very friendly. She is outgoing and even though she can no longer dance, she is still the cheerleader who loves making other people smile.

Kayla’s adaptive tricycle will help improve her leg strength and ability to walk. We are so excited for this inspiring girl! 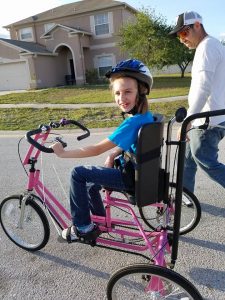