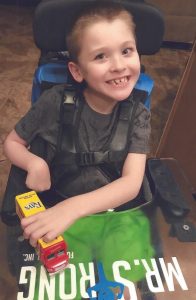 Meet eight-year-old Landon, who spent over 50 days in the hospital after birth. He was diagnosed with multiple illnesses, including spastic quadriparesis and cystic fibrosis. He is cognitively equivalent to a one-year-old child. He also cannot walk, and his vocabulary is limited to 22 words. He can communicate using sign language. Furthermore, Landon is visually impaired. He has many disabilities, but his strength is apparent.

Landon can be described in a word, adorable. He is always active and ready for adventure, even when he does not feel good. Landon is very social. His favorite place to interact with people is at Target. He goes through aisles just to say hi to the shoppers. For Halloween, Landon even dressed like a Target employee. He sat behind the cash register and greeted his customers. Landon attends school, too. His favorite subjects are P.E. and music. He throws balls around the room for other kids to chase. During music, Landon excitedly bangs on anything that makes noise. On quiet days at home, he interacts with the television by squealing with excitement.  Landon is a baseball fan, too.   Landon roots for his home team, the Tampa Bay Rays. He cries with joy whenever they win a game. Landon wears emotions on his sleeves and holds everybody’s hearts in the palm of his tiny hands.

Landon needs a Hi-Low chair to make his home more accessible. Please be a sponsor soon! 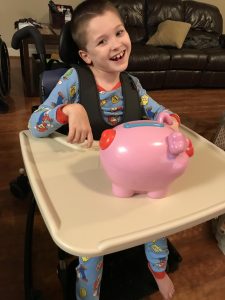 Landon loves is new Activity Chair!!!! Having a seating option other than his wheelchair has been a great experience for him. Mom is thrilled with the ease of transferring him and being able to roll around the house.