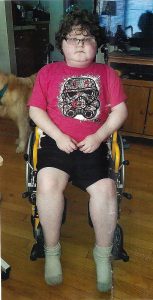 Hooray!  Samuel received  a new wheelchair and couldn’t be happier!  The 15-year-old is diagnosed with Duchenne Muscular Dystrophy, an inherited disorder of progressive muscular weakness, typically in boys.  Due to his condition, he is unable to walk and relies on his caregiver for mobility.

Samuel is a happy teenager who goes with the flow.  In his free time, he enjoys watching the television show the Big Bang Theory.  He also loves playing video games.  Samuel hangs out with his twin brother and older sister whenever he can.  He also has a special bond with his service dog, a golden retriever named Davis.

Samuel needed a new manual wheelchair.  He outgrew his old one, which he relied on to get out of the house.  He has a power wheelchair, but it will not fit into the family’s vehicle.  His new manual wheelchair is essential to his safety and ability to complete daily tasks.  We are so excited for Samuel!