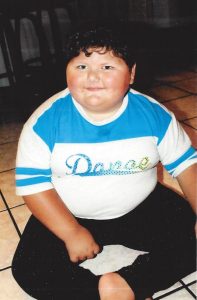 When Sophia was just 3 months old, she was diagnosed with a rare form of Group B Strep Meningitis, also known as Guillain-Barré Syndrome (GBS). The disease caused brain damage on the left half of Sophia’s brain, which affected the right side of her body.

“The doctors told us she would be a complete vegetable, and I just cried and cried,” said Debbie, Sophia’s great grandmother. “She sure has proved them wrong.”

Seven years later, Sophia lives with her great grandparents in a remote area of Florida. She is non-verbal, and up until May of 2019, her only mobility methods included scooting on the floor, rolling over and using a walker. Because of where the family lives, therapy options for Sophia are limited. Physical therapists (PT) are miles away and must travel to her house for therapy, and Sophia can only use her walker inside the house because they live on a gravel road.

One day while doing therapy with the Florida Elks, a volunteer-run nonprofit organization, Sophia’s PT suggested that she try an adaptive bicycle.

“When she (Sophia’s PT) mentioned getting a bicycle for Sophia, I thought she was crazy,” said Debbie. “But then she showed us the Freedom Concepts website and I was shocked. I saw bikes that Sophia could actually ride.” 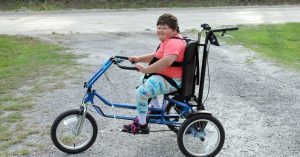 Just one month after getting the bike, Sophia and her great grandparents bike a minimum of 1.5 miles per day, and sometimes even 3 miles if the weather is good.

“We love the bike and so does Sophia,” said Debbie. “She laughs and giggles the whole time she’s riding it.”

The family hopes that one day the bike can help Sophia build up enough strength to walk on her own.