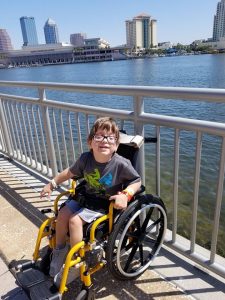 Meet four-year-old Nicholas. His life began in turmoil. He was born premature and placed in the intensive care unit for five months. The first night in ICU Nicholas nearly died from a pulmonary hemorrhage. He has endured over 26 surgeries, including shunt procedures and an operation to close a hole in his heart. His daily challenges pile on like a terrible rock slide. Doctors eventually diagnosed Nicholas with cerebral palsy, hydrocephalus, and seizure disorder. He is also developmentally delayed. Sometimes, however, miracles really do happen.

Nicholas is happy. He likes to learn new things on YouTube. He is even excited to attend prekindergarten school. He listens and dances to a variety of music. Nicholas hears his favorite songs and wiggles his shoulders with the beat. He zips around on his walker and is hard for his dad to catch. His playfulness gets everybody laughing. Dad described his son: “He knocked on death’s door and ran the other way!” Meet Nicholas and witness the miracle of his life.

Nicholas received a therapy tricycle to improve his leg strength and stamina. The improvements will increase his ability to walk and be more independent. From the first day he rode his bike he has not stopped he loves it so much! Keep going Nicholas!