Noah Crawls for the 1st Time! 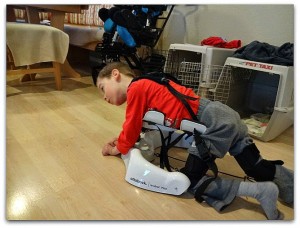 December 2014-Noah needed a device called a Krabat Pilot Crawler. This device would help him to crawl for the first time ever! Noah had been turned down by insurance several times on this device. Wheelchairs 4 Kids was able to get this special piece of equipment for Noah. Now he can be more independent while getting some important exercise.

Noah is a 5 year-old boy who endures a heartbreaking list of challenges. He was diagnosed with spastic quadriplegia and Cerebral Palsy. Noah suffers from involuntary Athetoid Movements, which causes his body to always be in motion. Noah is unable to walk or independently hold himself upright. He also cannot maneuver a wheelchair. Fun would seem to be unfamiliar for Noah, but he battles his way to happiness.

Noah likes the feel of fresh air as he takes lovely walks with family and friends. The sun reflects off his already sparkling eyes and bright smile! Another guaranteed method to make the little boy beam is by giving him a tasty treat, and Noah’s favorite is rich and creamy cheesecake. One bite of the dessert and Noah goes “Mmmm!” Noah also loves watching his beloved show, Something Special, with Mr. Tumble. This show airing in the U.K. is created for children with learning and verbal disabilities. Noah absolutely adores the delightful series. Reality, however, is sometimes more powerful. Noah’s courage is something special.