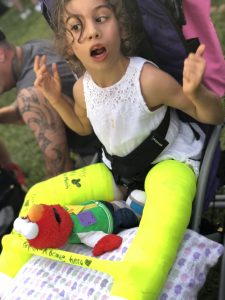 Meet nine-year-old Peyton. Her parents noticed that she exhibited strange behavior, including leg spasms and uncontrollable eye movements.  She was eventually diagnosed with a rare genetic disorder known as KCNK4; only three children in the world have the condition. She also struggles with cerebral palsy and Pierre Robin sequence. The combination of illnesses cause harsh obstacles for the brave girl. She is cognitively equivalent to a toddler and nonverbal. Peyton can walk around the house, but she requires a wheelchair for long distances. Peyton also endured surgeries on her nose, ears, mouth and hips. She is very feisty despite circumstances that would hinder most people.

Peyton’s family lovingly describe her as a sour patch kid.  She has a mischievous side. Give Peyton a toy she does not want, and she will push it away. Try again and she will throw the toy across the room and unleash a devilish laugh. In this way, Peyton shows her strength and determination. Peyton sometimes gets too excited and she will accidentally scratch a friend or family member. She immediately becomes sad and apologizes by being affectionate. Peyton is very sweet. She likes cuddling with her dog who is instinctively very gentle with Peyton. And, this girl is a cutie pie. She has large brown eyes with long, graceful eye lashes. She has lengthy brown hair with curls that frame her angelic face. People see Peyton and instantly fall in love. People get to know her heart and their lives are changed forever.

Peyton needs a Rifton tricycle. She recently had hip surgery and the trike will help her to recover and regain her ability to walk. 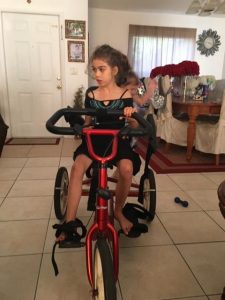 Peyton loves her new trike! She was riding her new trike as soon as it arrived! This trike will provide Peyton with additional exercise where she can strengthen her legs, core and even work on her balance!