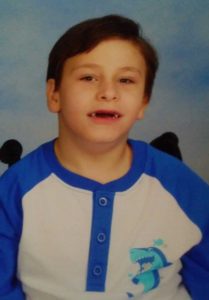 Meet six-year-old Rylan. He was diagnosed with cerebral palsy.  He walks either on his knees or using adaptive equipment. Rylan would be the first to say that he loves life despite his disability.

Rylan is a fun-loving boy. He enjoys singing and playing the air guitar. He is very convincing as he strums his fingers like the star of a rock band! He is very creative. Rylan is home schooled and likes to draw and paint during art class. Rylan also pursues physical health. He is determined to get better through swimming or riding his bicycle. His most unique talent, however, is talking. Rylan has a lot to say, and he is the first to begin a conversation during dinner. Rylan has one special gift that out shines his interests. His kindness.  He says “I love you” to everybody and showers them with hugs. He can make the sun appear on a cloudy day and to him we say, “Rylan, we love you, too!” 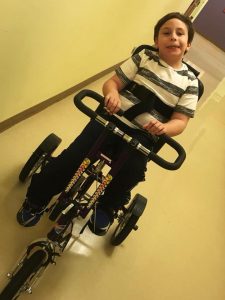 Rylan received his very own therapy trike. He is now going out for rides every afternoon. This helps him gain strength in his legs and core while also working on his balance. The best part is he gets to have fun will all his friends!