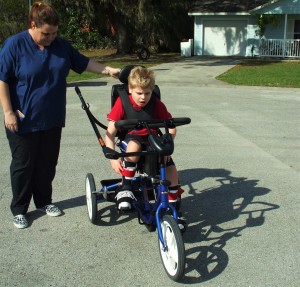 Congratulations Sean, on your new Rifton Adaptive Trike! 8 year-old Sean fights each day against Cerebral Palsy, seizure disorder and blindness. He is not able to walk. His ability to speak is also very limited. The array of trials does not stop him from being happy. With his new-found love of riding his bike, he will be able to strengthen his legs while having fun.

Sean has been riding an adaptive tricycle at therapy, and has shown much improvement in his strength and balance. Now that he has one of his own, he will be able to ride around his neighborhood with his mother helping him along the way.  Mom says the trike will give him so much more freedom, and joy in his daily life.