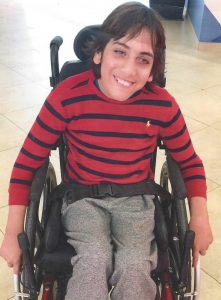 Meet 12-year-old Stephano. He was diagnosed with a rare neurodegenerative disorder called Ataxia Telangiectasia. His illness caused some difficult obstacles. He cannot walk without assistive devices. He also struggles talking, although he is currently working hard with his speech therapist. Stephano remains upbeat despite his limitations.

Stephano enriches everybody’s world. He loves attending his inclusionary school where he makes a positive impact.

His teachers say that he brightens each room with his smile. His peers at school nickname him Mr. Happy and Sunshine. He also inspires his dad. Stephano’s father is astounded by his son’s determination and great attitude. For example, Stephano is unable to read, but he manages to play simulators and other games with text. He plays basketball with the help of his friends. He never complains about having relentless trials or bad days. In fact, Stephano lives as though each moment is perfect. Stephano should have another nickname: Mr. Amazing!

Stephano needs a therapeutic tricycle to improve his overall strength, stamina, and muscle control. Pleas be his sponsor! 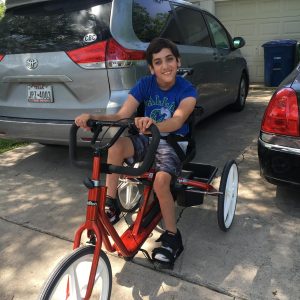 Stephano received his therapy trike! Dad mentioned he was ridding all weekend long. He did not want to get off! This therapy trike will provide Stephano the opportunity to work on his muscle strength tho help improve his balance while improving his overall cardiovascular health!